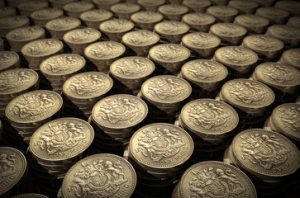 After he came to the throne in 1659. C. , Aurangzeb banned the use of ‘Kalima’ on their coins. As a result, the “Kalima” was deducted from the Indian coins. He set his own preferences for the currencies issued during his tenure.

The square face as Shah Jahan coins was used in Akbarabad and Junagarh in the early years. Aurangzeb introduced a separate formula called ‘Sanhjulus Manus zarb’, named after mint. The connotation of this sentence was made “in the year (reign) of accession associated with prosperity (coin name). “

Compared to the copper coins issued during the time of Shah Jahan and Jahangir, the Aurangzeb copper coins had a different property. His coins were issued to the weight of the “dam” (a small Indian coin) until the fifth year of his reign. According to historical evidence, the weight of the coins may have been reduced due to the rise in the price of metals during this period. The Aurangzeb copper coins bore differently on the obverse ‘FulusBadshah (or Shah) Alamgir, FulusAlamgiri, FulusAurangzebshahi, Aurangzeb Alamgir, Sikka Mubarak julus. The reverse of the coin had the name of the coin. It is known that most of the places issued the Aurangzeb coins.

The places like Ahmedabad, Akbarabad, Akbarnagar, Azimabad, Bijapur, Burhanpur, Gulbarga, Hyderabad, Cuttack, Lucknow, Shahjanabad, Sholapur, Surat, Ujjain etc. They issued gold, silver and copper metal coins. Copper coins were also known exclusively from Aurangnagar, Bairat and Udaipur. The coins issued in some of these locations were also considered non-imperial issues but were issued by local authorities without any imperial sanction.

The Aurangzeb coins were distinguished by the different properties that he used during his reign. Aurangzeb was followed by his successors for the inscriptions of his coinage. They uniformly adopted the formula ‘Sanhjulusmaimanat Manus’ with the name of the coin and the year of reign on the reverse.

There was a common pattern for the obverse, starting with the words “Sikkamubarak” (auspicious coin), followed by the king’s name and ending with “Badshah Ghazi”. Sometimes Aurangzeb’s successors preferred to apply a couplet to the face of the coin rather than the specified pattern of the coins.